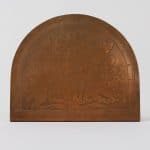 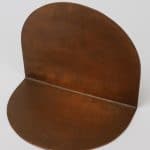 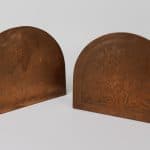 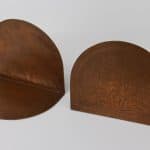 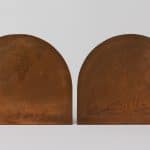 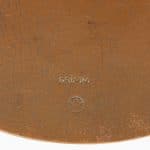 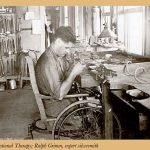 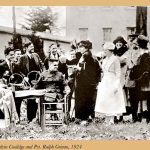 Pair of Ralph Grimm Arts & Crafts Acid Etched Copper Bookends. A member of the District of Columbia Arts & Crafts Society, Grimm was a blacksmith and coal miner who lost both his legs as a private in WWI. He learned copper and silversmithing through the occupational therapy courses at Walter Reed Hospital. Photographs of him appear in "Borden's Dream: The Walter Reed Army Medical Center in Washington" D.C." by Mary W. Standlee. The photographs show him at his workbench surrounded by his tools and work. He is also shown with Mrs. Calvin Coolidge. Grimm gained notoriety for his ability to go beyond his handicap and open his one business in Washington. Both bookends are signed "GRIMM" and have his "Rolling W" shopmark as well. It is the insignia of the 89th Infantry Division of which he belonged. These are heavy gauge copper and extremely well made. The acid etching is similar to work from Forest Craft Guild and Carence Crafters. Original patina. Circa 1920's. 5 5/8h x 6 5/8w x 4 1/2d

This item is not available for purchase online. If you would like to purchase this item or learn more about it, simply fill out the form below and one of our representatives will contact you shortly!

Inquire About This Product